You are so intelligent. Why do you need a myth?

“Isn’t Jesus just an extension of the pagan mythological creatures who died and rose again? Isn’t he just a made-up Jewish myth? Aren’t Christian holidays and holy days based on Pagan rituals? Don’t you see that it is all just a huge smoke and mirrors routine with “mysteries” that only priests are allowed to understand?

These are the questions asked of me by my atheist friends and children.”

Jesus is not a mythological person. His existence is part of history. You can argue some of the more sensational aspects of his existence, like rising from the dead if you like, but there is no doubt that a man named Jesus existed and he was killed at the hands of the Romans by the insistence of the Jewish Sanhedrin.

Ancient Observers and Creation Myths: I teach a course where my students engage in the journey of science, beginning with the observations of early aboriginal people of Australia (40-60,000 years ago) and culminating with the search for elementary particles at the C.E.R.N. in Switzerland.

In this journey, we explore how early observations and the struggle to explain these observations and experiences, led to the development of creation myths and cosmological narratives, which have been passed down orally from generation to generation.

Through this exploration, we learn how ancient observers developed similar explanations despite existing on different continents and at different times.

Most creation myths begin with darkness or nothingness and then light or sound or a first being emerging to aid in the creation of all things. In these ways, the genesis story is not unlike the expected creation myths developed by others through time.

Proof that Jesus was a historical figure: Many of the stories in the Old Testament also seem reminiscent of the standard oral tradition, moral stories of ancient people.

There is one basic difference, however; Jesus was not only mentioned in the New Testament of the Bible as a flesh and blood person, but also by the Jewish historian, Josephus, as well as the Roman historian, Tacitus.

All accounts describe Jesus as a man who was real and not a fictional character.

Jesus is mentioned in the Gospel texts by real men, the Apostles, who were also referenced by ancient historians.

Additionally, Jesus is also mentioned in the Quran. Not just as a great prophet of God, to be respected and revered, but also as a child born to a virgin.

“He is spoken of as “the word of God,” as “the spirit of God,” as a “Sign of God,” and numerous other epithets of honor spread over fifteen different chapters.

The Holy Quran honors this mighty Messenger of God, and the Muslims have not fallen short over the past fourteen hundred years in doing the same…”

Mary, the mother of Jesus, is also referenced in the Quran, “Behold! The angels said: “O Mary! God hath chosen thee and purified thee-chosen thee above the women of all nations.”

Mary’s mother is also mentioned as being a devout woman, who is barren and asks the Lord to bless her with a child.

The Quran mentions the following…

Some would say that Muhammed simply retold a story he had already heard from the Jews and/or Christians, but as a person, who did not know how to read or write, his rendering of Christ’s story and all of his teachings are said to have come from God himself. He was an Arab, why would he exalt a Christian prophet and martyr?

So, we have the Holy Bible, the Holy Quran and the writings of Roman and Jewish historians to validate the existence of a great man who walked the earth and his name was Jesus.

As a scientist, I separate faith, religion, and scientific thinking.

Even though I separate them and compartmentalize them, to some degree, they are not separate.

As a scholar and an educator, I understand all too well that we are the sum of all that has come before.

Just as science is dynamic and always changing with new information, so is our human existence and experience.

We are the sum of the knowledge and experiences of all human thinkers before us. We carry the traditions and thoughts of all who searched for answers before us.

Science and Religion: Much like Copernicus, Galileo, Kepler, Newton….. I too had to struggle with my desire for proof of all things physical and to reach the conclusion that not everything in the cosmos is necessarily quantifiable within our limited 4D space and time.

I must use the scientific process to evaluate what I can observe and quantify. Until new tools and information are added to the process, I must resign myself to endlessly seeking knowledge and truth with what is currently available.

The truth I seek through the scientific process has nothing to do with belief. It is the truth, based on a rigorous, iterative process, that yields verifiable evidence.

Science is dynamic and subject to change as new information is revealed and new tools are presented. The things that we are able to observe and to experience through our physical human existence may be described, measured, quantified, and modeled, but do not require “belief” to be accepted as truth.

As a scientist, who also believes, I find great joy in discovering “How God did it?” I stand in awe of the divine creation. My desire is to know more and to use the gifts God has given me to explore, appreciate and to even quantify what is seen and unseen in the universe.

My faith in God and my confidence in the scientific method are not counter to one another. They complement one another.

The need to quantify or scientifically evaluate an existence beyond the 4D space/time is not necessary for me to be able to believe in God or the Gospels, which recount the beautiful teachings of Jesus Christ.

My faith is personal and it is uniquely mine. Through the grace-filled sacraments and the living Liturgy (Word and Eucharist) of the Roman Catholic Church, I find a multifaceted, fully spiritual, physical, intellectual and transcendental engagement with God, Jesus, the Holy Spirit and all saints and angels in heaven. I find nourishment in word and spirit. I am given strength for this life’s journey and hope through the promise of eternal life. 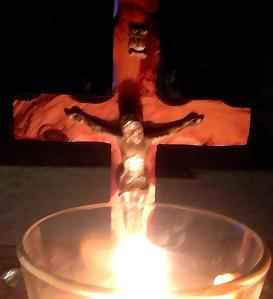 What I believe is best expressed through “The Apostle’s Creed,”

The truth about firefighting from an old woman firefighter

Daily Devotionals on Writings Received from the Celestial -- A COURSE IN MIRACLES, A COURSE OF LOVE, THE WAY OF MASTERY, and CHOOSE ONLY LOVE