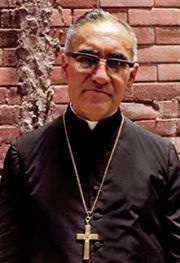 On this day, March 24, 2012, I am reminded of the people of El Salvador and Archbishop Oscar Romero.  My prayer is for the poor of that country and for those still grieving losses from terrorism and government oppression.

“I will never forget to pray for you…”

* A personal journey to social justice*

The first stirrings within my soul for social justice began when I became aware of the life and teachings of a man named Jesus Christ.  My own grandfather was a Methodist minister and I actually listened while I tried to stay awake at church.  I went to Sunday school and was greatly influenced by my grandfather’s kindness.  “Blessed are the poor in spirit…love your enemies….All are loved by God…” The words of Christ himself, along with the songs of the 60’s inspired by the civil rights movement, equality for women and desire for peace, in particular, served to fan the flames of “justice” in my mind.  Music spoke to me, came easily to me and seemed to be in my neo-cortex.  I just knew…I best expressed my feelings through music…it was like it had always been there…an integral part of my soul, my very makeup.  Perhaps I got it from my grandmother, the minister’s wife, who sang so beautifully at church, or my mother’s father who sang “Negro” spirituals while he worked.  Both of them seemed to have music in their souls.   Both also loved the Lord.  There seemed to be a connection there.

Social Justice: It was through the local Catholic Church, however, that I learned about something called “social justice,” and the plight of the poor.  I volunteered to clean homes of the elderly and found that I had a special talent for and love of caring for these lonely and isolated people.  My parents saw it as a positive way for this anxious, dark and lonely pre-teen to keep busy, so they didn’t argue.   It seemed to keep me busy and happy.  It was here that I first saw the face of Christ in others…where I heard the cry of the poor.  It ministered to my soul as much as I ministered to them in their loneliness and isolation.  I later worked at the local geriatric hospital where I found an even greater ministry of caring for them while they waited to die.

To me the Catholic Church seemed to be a beacon of social justice and reform in a society with social injustice, especially toward anyone who was not white, male and protestant.   Even my own parents were “anti-Catholic.”  When I spoke to my mother about attending the local Catholic Church, my mother’s response was… “Those damned hippies?”  Even so, she allowed me to go, as long as I would attend other churches as well.  So, I attended all of the churches in our little town.  I found fellowship, but I also found fear, hate, bigotry….in fact the local Church of Christ told me that the Catholics and everyone else were all going to hell and I would go with them if I weren’t careful.   Some of my best friends are Church of Christ goers, so I don’t hold that against them.  I love them anyway.  The Baptists spit too much while they spoke and they scared me.  The Pentecostals were interesting and charismatic…I liked them very much…but they too scared me.  They all had fellowship, but they lacked the intellectual depth needed to keep my interest.  They were superficial.  The Methodists were just boring, especially after my grandfather passed away (He was a Methodist Minister and I loved to go to church and watch him preach and hear my grandmother sing).

El Salvador:  It was also through the Catholic Church that I learned about the people of El Salvador.  A young brother, named James, spoke of something called liberation theology.  I listened but I didn’t know any person who was Hispanic.  It troubled me, but I felt as if there was nothing I personally could do to help out, so I simply put it out of my mind along with the starving children in Africa and the Iranian people.  What could I do?  It was just enough to be fighting for racial equality and women’s rights in this country, why did I need to be concerned with all of the horrible things going on in the rest of the world?

Activism:  A dear friend of mine, Yvonne, who shared my intellectual desire to learn more and my zeal for social activism in social justice issues, shared a publication which outlined the issues in El Salvador.  It shared accounts of horrors beyond anything I could have imagined, ….soldiers chopping women and children’s heads off and nailing them to the table in front of them, while the men were in the field working.  Why?  Why such terrorism of a poor people?  It made no sense.   It contained pictures of missing children and pictures of children found dead.  Not just dead, but having been tortured, …mutilated bodies… it was pure evil being perpetrated on a poor people.  Why?

“We are your people. The peasants you kill are your own brothers and sisters. When you hear the voice of the man commanding you to kill, remember instead the voice of God. Thou Shalt Not Kill….In the name of God, in the name of our tormented people whose cries rise up to heaven, I beseech you, I beg you, I command you, stop the repression.” Archbishop Oscar Romero to the military

Yvonne also shared a letter from Archbishop Romero to President Jimmy Carter, a president that I had voted for, begging him to stop providing American Arms and training to the troops who were terrorizing his people.  To his credit, Jimmy Carter listened and responded, but Archbishop Romero was murdered a few weeks later.  http://liturgyhouse.blogspot.com/2008/03/archbishop-oscar-romeros-letter-to.html

It was just the beginning.  We both wrote letters through Amnesty International, not just for El Salvador, but for prisoners of conscience the world over.  I felt like I was doing something other than just praying for people who were being tortured and oppressed in other countries.

Thank you Yvonne for opening my eyes to the injustice in El Salvador.

Liberation Theology evolved much earlier than El Salvador…”Liberation theology spread by virtue of the inner dynamism with which it codified Christian faith as it applies to the pastoral needs of the poor.”  http://www.landreform.org/boff2.htm

It grew out of the need to minister to those who were marginalized, oppressed, tortured, …whose human dignity was degraded…this was happening and still is happening the world over.  It was seen historically as a “third world theology,”  which began in Africa and elsewhere in response to human need.

“The broad definition of liberation theology stresses the interrelatedness of differing structures of oppression and domination. Liberation from oppressive structures necessarily involves political, economic, social, racial, ethnic, and sexual aspects. As a paradigm, liberation theology today places explicit emphasis on assessing different forms of human oppression and suffering, and liberation from them, as layers in a complicated process.
“http://www.encyclopedia.com/topic/liberation_theology.aspx

The Complicated Process: The people of El Salvador were not only being oppressed in an oligarchy, but they were also, unfortunately, caught up in a geopolitical struggle between ideologically driven superpowers, much as many people in the Middle East had been too (Iran for one).  El Salvador had evolved, as many countries in Latin America have done, into an oligarchy, where 90% of the people lived in poverty and an elite few (an aristocratic few) which included a powerful military, prospered.  The socioeconomic injustice (wealth inequality) in this type of system was the perfect breeding ground for a form of “Marxism,” which might be considered a better alternative for a poor people.  The entire western world was afraid that “communism” would get a foothold and prey on the fears and desires of poor, uneducated people, who were tired of the inequality in their countries.  So, the push for western countries was to trade and aid those countries who were the most vulnerable to the communist threat.

The connection between “Liberation Theology” and communism seemed to grow out of the need for social justice for a people, not some desire to develop a communist government.  The church was slowly drawn into the larger and very dangerous sphere of geopolitical corruption in an attempt to find some viable means to help the poor of El Salvador. Pastoral care was the primary motivation for developing a Theology of Liberation or “Liberation Theology.”

Those who supported “Liberation Theology” were among the people who wanted greater wealth distribution and a lessening of socioeconomic inequality.  Some saw communism as a better alternative for the people than an Oligarchy, where their needs were not being met.  Capitalism was a catalyst to continue the oligarchical status quo and to keep the leaders away from the communist ideology, which was seen as a threat to any free democracy.

The American, capitalist, geopolitics of the time was driven by..

1) the desire to protect a susceptible people from being indoctrinated by communist thinking…as Cuba also had been.

2) the desire to protect against the spread of anti-democratic regimes, namely the spread of communism (which had nuclear capabilities and an expressed determination to defeat western democracies).

3) the need to protect business interests in the region, namely coffee, tobacco, etc.

The U.S. has had a long history of using trade and world commerce to maintain their status as a world leader.  This status assures our seat at any table where the security of the American people and western allies is in question.   America’s leadership in global trade and commerce has been embraced over the history of this country and even now with the current trade agreements, which are not seen as completely helpful to the 1) American people, who see their jobs outsourced, or   2) American companies, who must compete in a competitive world market.  Our leadership role in keeping the balance between world superpowers balanced has assured peace, or at least a peace fueled by fear of “mutual assured destruction.”  Keeping nuclear weapons out of the range of the U.S. and allies was a chief concern for military strategists of the past and also today.

The problem was with the socioeconomic injustice imposed by the selfishness and greed of a few and the denial of basic human dignity and needs of a people.  The Church had a pastoral and theologically grounded mission to care for the poor.  The church must have a voice in matters of social justice, but must not dictate a “state religion” as a path to pastoral care.  Jesus does not want us to take up arms against one another in our fight for social justice.  He wants us to pray, to love, and to let our voices be heard when there is injustice around us.  We are not to be silent.  We are called to act with justice.  We are called to love one another as Christ would love others.  This also calls many of us to activism, to serve as the voices for social justice and to minister to those in need.

Occasional Devotionals on A COURSE IN MIRACLES, A COURSE OF LOVE, THE WAY OF MASTERY, and CHOOSE ONLY LOVE . . .with Celia Hales