I have a student who is an Iraq vet. He approached me after class and wondered if I wanted to see his pics from Mesopotamia…modern day Iraq. We had been discussing the evolution of scientific thinking, which included contributions from Sumer, Egypt..and so forth.  I was genuinely eager and wanted to accommodate him. To my surprise, he spent almost three hours over a two day period sharing his experience through pictures. 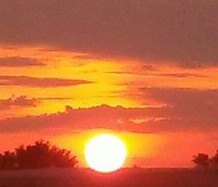 He is a wonderful photographer and his descriptions were so good, I could actually engage in his experience.  I could smell the liquid sewage and the burning poop and diesel. I could feel the dry heat. I could feel the grit on everything and I could feel his sense of purpose and his fear during a firefight. I could feel his appreciation for the transports, armored and no, the machine gun with tracers for each fifth shot… Even though he had two separate deployments, he was in four different places. Each place had its own story, own experience. Some included battle and firefights, but mostly, interestingly enough, his experience was boring, long, dirty, filthy, hot, vulgar and lonely. He was either baking or freezing to death. The environment was nothing short of gross. It was like camping out in the desert for three years, with very little if no running water, horrible food and unsanitary, sickening conditions.  The air was filled with rancid smells and wild dogs ran at the perimeter of their “base.”

He took photos of local people, mostly women, children and old men…all covered from head to toe in that heat. He spoke of his disgust at the destruction of their country’s infrastructure, yet expressed hope when he showed images of young girls attending a local school.

When I asked him if he was afraid, he said , “no, not really.” I was in a tower where I could see nothing but desert for miles in all directions. When in the cities, I knew I had 40 buddies who would not abandon me if things went wrong. I actually felt very safe most of the time.” I then asked him, “does it frighten you now?  He said, “no, not really. I just can’t be in a city..being around lots of people and noise makes me nervous.”

How Could I Possibly Relate?

Being a field geologist, I have experienced some of the same things, with rustic or wild conditions..no baths or running water.. with rattlesnakes, spiders, moose, bears and mountain lions, without being shot at or fearing IED’s.  I too have PTSD, from a nervous childhood, where there was no diagnosis or accommodation for children with an anxiety disorder as well as a failed marriage with an abusive spouse.  These personal experiences helped me to empathize with him, but I still cannot imagine how horrible their experiences truly were…how those poor people in Iraq also felt as they experienced dictator, invasion, destruction, death and now such horrible poverty. I am sure I have no true idea.

I feel blessed to have been able to allow this brave young soldier to share his experience.

Why? Because even though it was a hell hole, he found the beauty and wonder of the place.

Through his boredom, fear, and enduring of horribly unsanitary conditions, he captured thunderstorms, lightening, sunsets which were breathtaking, soldiers keeping watch, repairing water lines, burning poop…he catalogued THEIR experience through his camera lens and through his eyes. He took pictures of berms, flies, helicopters, ammunition, guns,….he explained every detail in each picture..it was a tremendously interesting and truly amazing experience.

What did he get from the experience?

Wow! This young man returned with anxiety…I couldn’t help but note that his hand shook when he was talking and how his voice trembled when he did presentations for his peers. He occasionally broke out in a sweat as he struggled with expressing himself. He is  such a brilliant, funny, kind hearted and wonderful young man. I encouraged him to go into photography. He could easily be a photo journalist. He is sensitive and very much a poet, an artist. He has a true gift.

I am so glad he felt comfortable and safe enough with me to share his art, his experience. I have truly been touched by his sharing. What a great experience?

Praise God for him. God bless him and God bless all military veterans and active military for their service to our great country. I pray we are doing enough to care for him and all vets.

Occasional Devotionals on A COURSE IN MIRACLES, A COURSE OF LOVE, THE WAY OF MASTERY, and CHOOSE ONLY LOVE . . .with Celia Hales