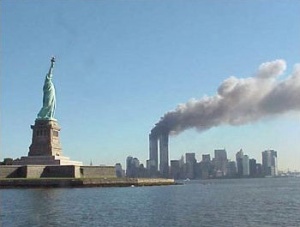 On the morning of 9/11, I was preparing to teach a Physics Lab on Bernoulli’s principle. My students were experimenting with the design of aircraft wings as they investigated the physics of “lift.” This meant that they would have to propose various designs and develop a methodology for testing the efficacy of their designs.
The First Plane: As the students slowly streamed in, they were announcing that a plane had crashed into one of the twin towers in NY City. This caused great agitation in some of my students who had friends and family in NY. A few minutes passed and more students entered the room upset about the plane crash. It became clear to me that we would not be able to do this particular lab as it would involve the “crashing” of airplanes. I decided to consult the lab coordinator to see if we had the supplies to build boats instead of airplanes.
A Change of Plans: As I made a quick search for the lab coordinator, Stephen, I found him digging through the bottom drawer of the desk in my office. He was looking for the little camping TV that I kept there. He wanted to see what was going on in NY and there were no televisions in the Physics building, except for mine. I told him he could use the TV and promptly returned to my students in the lab. To my surprise, the classroom was full of people talking about leaving so they could find out about loved ones. Typically, I would never cancel a lab, but almost half of the class was determined to leave. Surprised by their emphatic departures, I made the decision to let the rest of my students go, as learning was clearly not on their minds on this particular morning. I had to admit my own morbid curiosity was also nagging at me. Something significant seemed to be happening and I wanted to know more.
Watching the live coverage: I dismissed my grateful students and proceeded to my office to watch the TV with Stephen. To my surprise, there was a crowd in the hallway streaming from my office. As I entered, I couldn’t help but notice that as many as 10 people were crowded around the tiny little, 10-inch screen. We all watched the live coverage as the newscasters were sharing the horror of what had happened…as they spoke of people trapped in the tower and the possibility of a freak accident.

As we stood watching the live coverage, more people began to come into the room…probably 15 by now. We were from all over the world. Stephen and I were the only two Americans, as I recall, and the others were from India, Iran, Pakistan, China, Jordan….we were a multinational group of Physics graduate students. We were a mixture of Christians, Muslims, Hindu, Jews, atheists….all gathered into one space during one specific span of time.
The Second Plane: We all gasped in shock and horror as we watched the second plane crash into the second tower. We all knew at that moment that this was no accident. The reality of something planned, on purpose, calculated…was beginning to emerge. One of the Muslim students pronounced, “It is Arabs!” Many of us murmured in disbelief… I spoke up, “now, we don’t know for sure…Oklahoma City was not foreign extremists.” People nodded in agreement that we need not jump to conclusions. We stood there in a shared horror.
Shared Moments of Horror: We were all shocked. We were all horrified. We were all deeply troubled by the 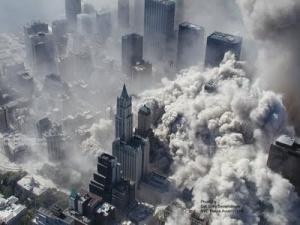 images of people jumping from buildings and crashing to the ground. It was horrific! Chaos, shouting….it all unfolded in front of us. One tower collapsed, then another….both creating seismic waves that registered at seismic stations around the globe. Unbelievable! Now there is a report of another plane hitting the Pentagon…there was a rumor of other planes in the air.
The Third Plane-America Under Attack: I walked across the hall and asked my friend Kjell (Navy, grad student in Physics) what he thought was going on and he said, “We are under attack.” He was clearly upset and did not want to talk about it further. I found myself trying to keep a positive attitude, perhaps actively in denial of what had just transpired to my fellow countrymen. I felt bad for Kjell who apparently lost a friend at the pentagon. The coverage continued for many days and the magnitude of the event unfolded day after day. Our country had clearly been attacked and airliners with innocent passengers had been used as bombs against American citizens. It was beyond imagination.
Fear and Bigotry: My Muslim student friends shared their fears of being profiled by angry Americans. They feared for their wives going to the store in their Muslim dress. They feared for their daughters going to school. They were afraid of American retaliation against them simply because they were visibly Muslims. These highly intelligent, peace-loving, God-fearing people, were terrified. They were just as upset by the senseless loss of life as the rest of us. I tried my best to reassure them that Americans and Christians would not hold them personally responsible for the actions of a radical arm of Islam.

I hope my sharing this story will help others to realize that Muslims are not all extremists. Just as many of us, who are Christians, are disgusted by the Florida minister who wants to burn the Qur’an, they too denounce Al Qaida and all who distort Islam. “Let there be peace on earth and let it begin with me.”

The truth about firefighting from an old woman firefighter

Daily Devotionals on Writings Received from the Celestial -- A COURSE IN MIRACLES, A COURSE OF LOVE, THE WAY OF MASTERY, and CHOOSE ONLY LOVE