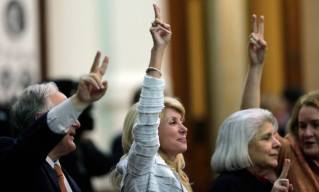 A Moral Dilemma:  A family member asked me my opinion on an article about a Jewish woman who had to make the choice to abort a baby who was so badly deformed, it would not be viable outside of the body.  http://www.huffingtonpost.com/tamara-mann/heartbeat-involuntary-miscarriage-and-voluntary-abortion-in-ohio_b_2050888.html?ncid=edlinkusaolp00000003

The doctors deemed maintaining the pregnancy until the baby either died naturally or was born and then died, was a threat to the life of the mother. The woman suffered greatly in the decision, but the Jewish faith allows for this and the woman felt that she was doing the best thing.  She not only had to grieve the loss of her baby, who she desperately wanted and loved, but she also had to go through the torture of having to agree to signing a document essentially saying that she understood she was “killing” her baby.  Very traumatic for sure.

The Catholic Response:  My response was, that as a Catholic, I would not have had the abortion, I would have waited for natural death.  The following note is an extension of the written response to the friend of the family member, who posted on the family member’s post.  The woman contended that Mr. Obama was evil and wanted abortions and anyone who voted for him had a questionable soul.

Dear _______  I want to correct you about Mr. Obama and abortion.  I have never, ever met a pro-abortion person.

The bottom line is this.

1) Roe v Wade is about privacy and the securing of reproductive rights for all citizens, not just women.
2) Roe vs Wade limits abortions to the first trimester, but allows states the freedom to make their own rules regarding abortion practices.
(a huge mistake in my mind:-) )  Just like they have now done with marriage equality.
3) Mr. Obama supports Roe v Wade “tooth and nail,” not exclusively abortion.
4) Right to life groups have erroneously targeted him as pro-abortion because he refused to sign a religiously biased “live birth” bill in Illinois, while he was a state Senator.  Now, he is the devil, because he is pro-women’s rights and supports all legislation which assures equal treatment of all women, under the law, regardless of socioeconomic status.

The truth is, there was already a law that required doctors to render aid to anyone born alive.  Doctors are not allowed to murder viable babies.  Constitutionally, if they are viable, then they are a person and therefore a citizen of the U.S.  Aid must be rendered or face the same outcome as that horrid late term murderer who was recently convicted of killing babies.  The particular bill in Illinois was religiously motivated and would have been overturned in federal courts.

5) Mr. Obama is “pro-reproductive rights,” not pro-abortion.. He wants all women to have the choice to make decisions about what happens to their own bodies.
6) Contrary to popular right wing blogs, like “The Blaze,” Planned Parenthood provides much needed reproductive services to ALL women and the fact that less than 3% of those services are considered abortion does not negate the much needed positive preventive care also provided to all women, especially those who cannot afford insurance.

7) Mr. Obama loves babies.  He would never want a baby to be murdered. He is a loving father and countless times he was shown great compassion for babies in particular.8) Mr. Obama, as the president of the United States of America, took an oath to uphold the constitution of the US.

It is his job to uphold what is legal in this country.

9) Women MUST consider the ramifications of having any government entity dictating personal reproductive freedom.

Government Control of Reproduction:  One only needs to look to China to understand how government control can limit our choices in terms of reproduction.

State Religions controlling women: One only needs to look to Afghanistan to see how a theocracy limits the individual freedoms of all people, most especially women.

10) If you are a woman, you MUST vote all theocratic and plutocratic extremists out of office. Their policies will not reduce abortions.  Abortions have been going on since the dawn of mankind. Desperate women in desperate situations will find a way to get rid of one life to preserve their own and the lives of their other children. There are a great many of us who would never consider an abortion regardless of how difficult life would be for us.  We could never have an abortion, but how many of us want the law telling us what we can and cannot do in our own personal lives, especially when it comes to matters of reproductive freedom?

Hypocrisy:  Pro-birth, yet anything but pro-life. The same folks who have paranoid fears about big brother coming and taking their freedom and their guns are the same people who would gladly take a woman’s reproductive rights from her (access to birth control as well as the legal right to an abortion) in the name of preserving life and their chosen religion’s freedom, which they will gladly impose on the rest of society as they carry their guns (prepared to kill) and also cheer on states to execute prisoners on death row.

Women’s Rights:  We must fight for the right for all women to make informed choices, regarding reproductive choices and birth plans for delivering our babies.  No woman should have to have a repeat cesarean section simply because the Doctor’s or Hospital’s mal-practice insurance company says so.  Decisions regarding all personal reproductive issues should be made between the man, woman, doctor, clergy, family and God, not by any government agency.  While, I personally do not believe that any abortion should ever happen, especially late term, I do not think that governments or religions should make the choice to end a pregnancy which endangers the mother’s life.  That is a private matter.

Religious Freedom: Our religious freedom must be protected by allowing ALL the freedom to make their own choices, regardless of religious views on when life begins. Catholics must choose all life.  Jews may choose the life of the mother over the life of the unborn child….but no government should dictate this for a woman.

As a Catholic woman, “I” would never choose abortion, EVER.  I allow others the freedom to choose, but will always pray for and encourage life as a choice.

As an American, I have the freedom to choose and “I” choose life. I choose to not use birth control. I choose…not a government, not a church, and certainly not a damned man.

Women MUST vote to protect their continued FREEDOM!

I stand in solidarity with my sisters of all nations, all religions, all sexual orientations, all socioeconomic
situations….ALL who suffer in poverty and persecution.  May they never feel powerless again.

Let Freedom Ring and may education be their key to life, liberty and the pursuit of happiness.

May the Lord bless all people, not just women, with prosperity and a heart filled with love and respect for the dignity of all life from conception to the grave.

Praying for all who are on death row.  Praying for all women, that they feel compelled to focus on their own education and life, and abstain from extramarital sex, until they are ready to be married.  May they have the courage to carry each and every pregnancy, planned and otherwise, to full term.  May they always choose life.  This is my greatest prayer.  “May they choose life.”  In Jesus’ name, AMEN!

One thought on “Women’s Rights – “Women must be given freedom to make informed choices!””

NWACC Daily Announcements
Grace for the road
30 stories in June